An error report handler for panics and eyre::Reports for colorful, consistent, and well formatted error reports for all kinds of errors.
Documentation

An error report handler for panics and the eyre crate for colorful, consistent, and well formatted error reports for all kinds of errors.

color_eyre helps you build error reports that look like this: 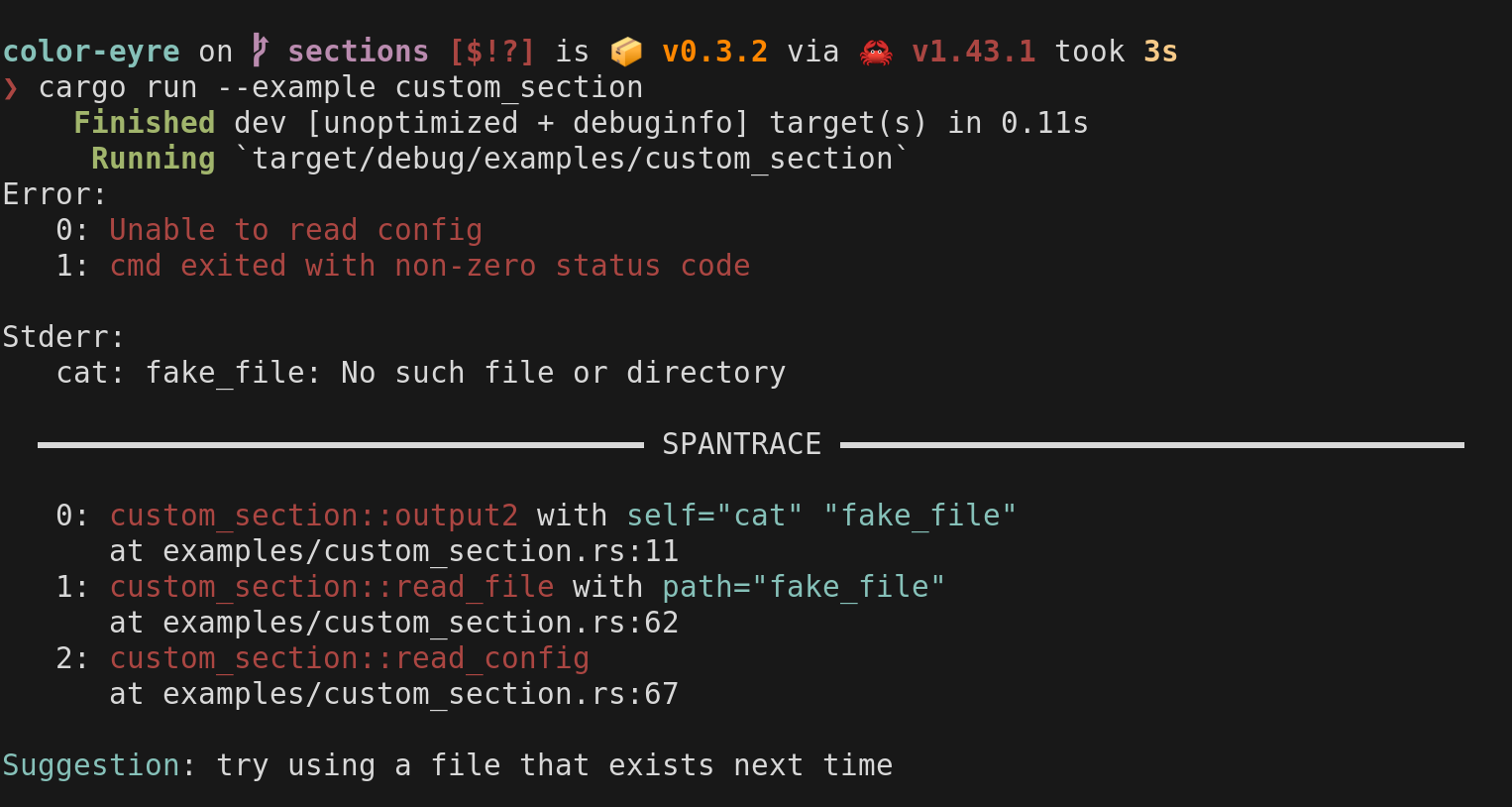 Add the following to your toml file:

And install the panic and error report handlers:

If you don't plan on using tracing_error and SpanTrace you can disable the tracing integration to cut down on unused dependencies:

color-eyre defaults to capturing span traces. This is because SpanTrace capture is significantly cheaper than Backtrace capture. However, like backtraces, span traces are most useful for debugging applications, and it's not uncommon to want to disable span trace capture by default to keep noise out developer.

To disable span trace capture you must explicitly set one of the env variables that regulate SpanTrace capture to "0":

Cargo profile overrides can be used to mitigate this problem. By configuring your project to always build backtrace with optimizations you should get the same performance from color-eyre that you're used to with eyre. To do so add the following to your Cargo.toml:

color-eyre provides 3 different report formats for how it formats the captured SpanTrace and Backtrace, minimal, short, and full. Take the below snippets of the output produced by examples/usage.rs:

Running cargo run --example usage without RUST_LIB_BACKTRACE set will produce a minimal report like this: 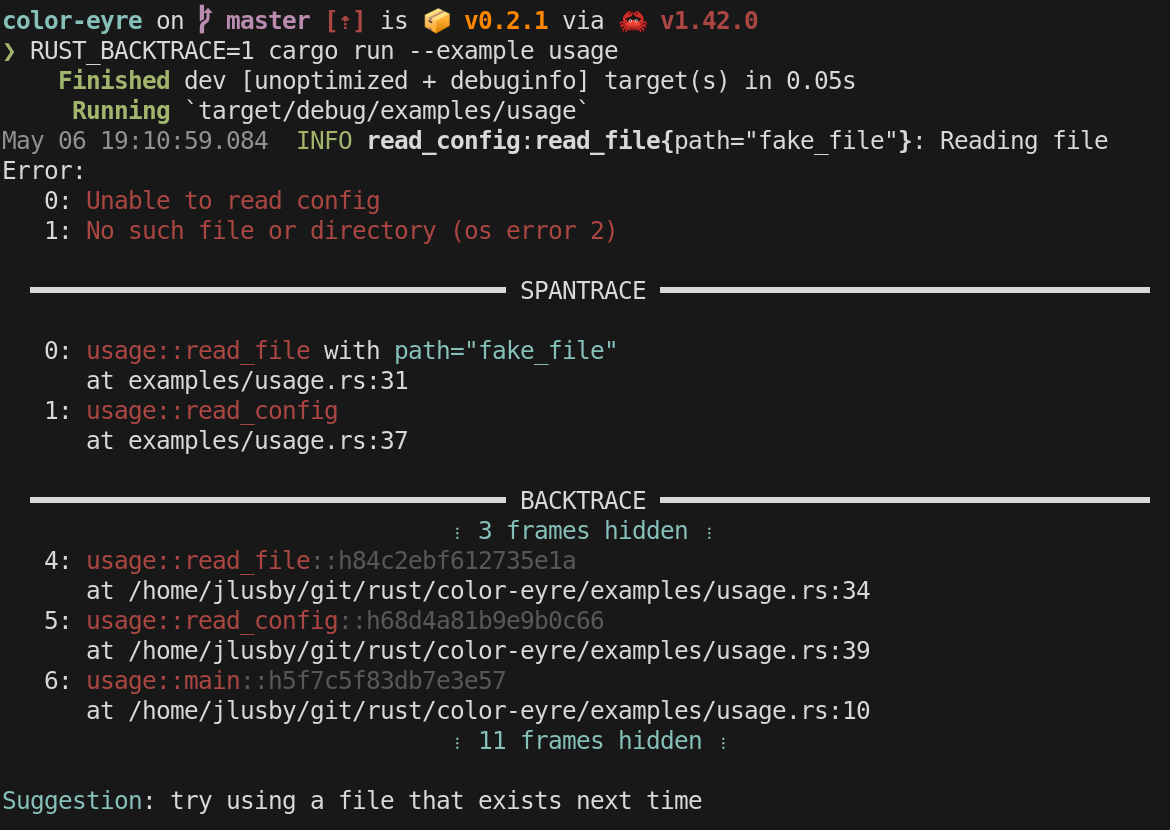 Finally, running RUST_LIB_BACKTRACE=full cargo run --example usage tells color-eyre to use the full format, which in addition to the above will attempt to include source lines where the error originated from, assuming it can find them on the disk. 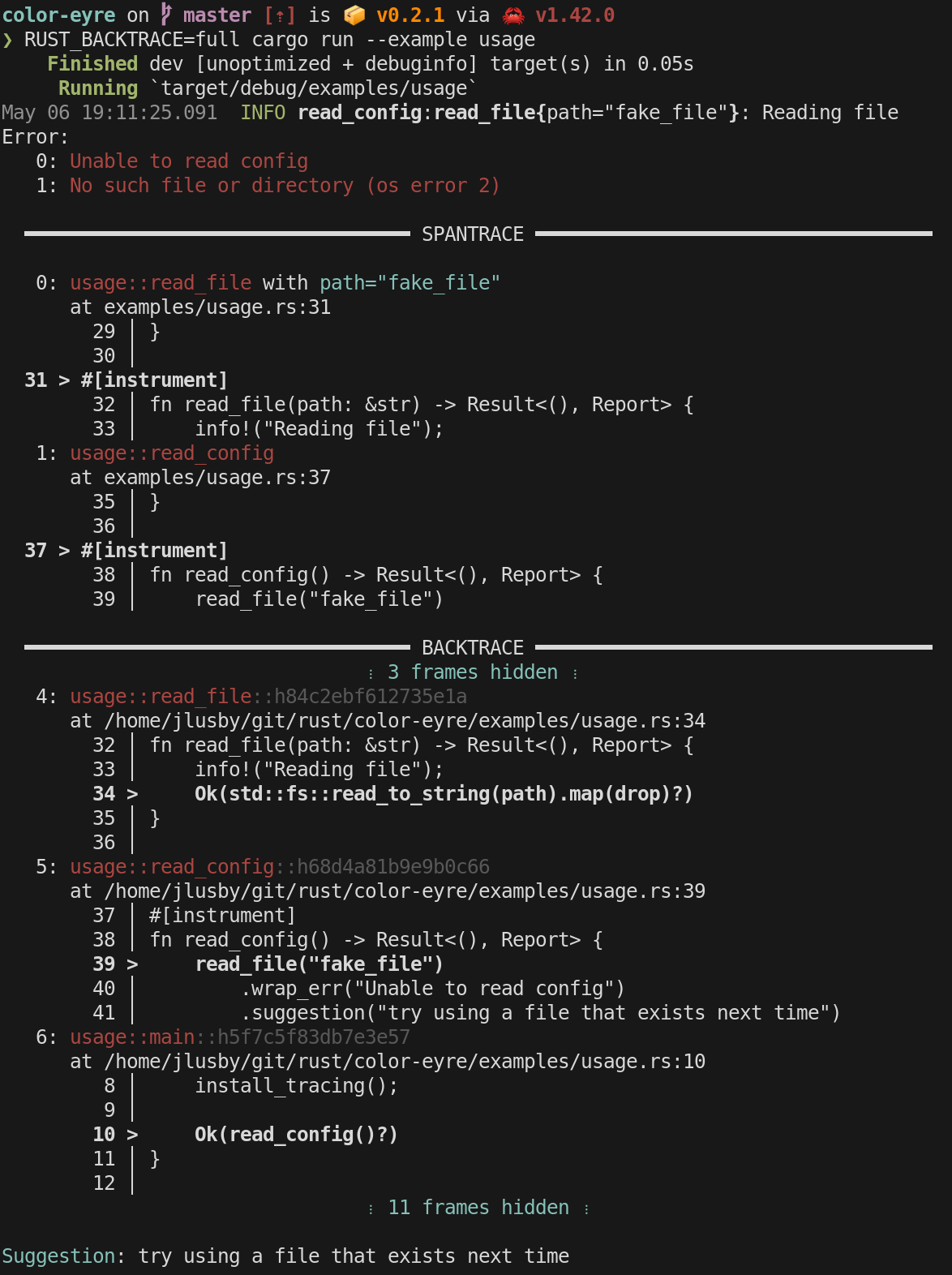 The section module provides helpers for adding extra sections to error reports. Sections are disinct from error messages and are displayed independently from the chain of errors. Take this example of adding sections to contain stderr and stdout from a failed command, taken from examples/custom_section.rs:

Here we have an function that, if the command exits unsuccessfully, creates a report indicating the failure and attaches two sections, one for stdout and one for stderr.

Running cargo run --example custom_section shows us how these sections are included in the output:

Only the Stderr: section actually gets included. The cat command fails, so stdout ends up being empty and is skipped in the final report. This gives us a short and concise error report indicating exactly what was attempted and how it failed.

Aggregating multiple errors into one report

It's not uncommon for programs like batched task runners or parsers to want to return an error with multiple sources. The current version of the error trait does not support this use case very well, though there is work being done to improve this.

For now however one way to work around this is to compose errors outside the error trait. color-eyre supports such composition in its error reports via the Section trait.

For an example of how to aggregate errors check out examples/multiple_errors.rs.

Custom configuration for color-backtrace for setting custom filters and more

The pretty printing for backtraces and span traces isn't actually provided by color-eyre, but instead comes from its dependencies color-backtrace and color-spantrace. color-backtrace in particular has many more features than are exported by color-eyre, such as customized color schemes, panic hooks, and custom frame filters. The custom frame filters are particularly useful when combined with color-eyre, so to enable their usage we provide the install fn for setting up a custom BacktracePrinter with custom filters installed.

For an example of how to setup custom filters, check out examples/custom_filter.rs.