The example below demonstrates demand-driven change propagation, which is unique to Adapton's DCG, and its approach to incremental computation. The example DCG below consists of two kinds of nodes:

The simple example below uses two mutable input cells, num and den, whose values are used by an intermediate subcomputation div that divides the numerator in num by the denominator in den, and a thunk check that first checks whether the denominator is zero (returning zero if so) and if non-zero, returns the value of the division:

After allocating num, den and check, the editor changes den and observes check, inducing the following change propagation behavior. In sum, whether div runs is based on demand from the Editor (of the output of check), and the value of input cell den, via the condition in check: 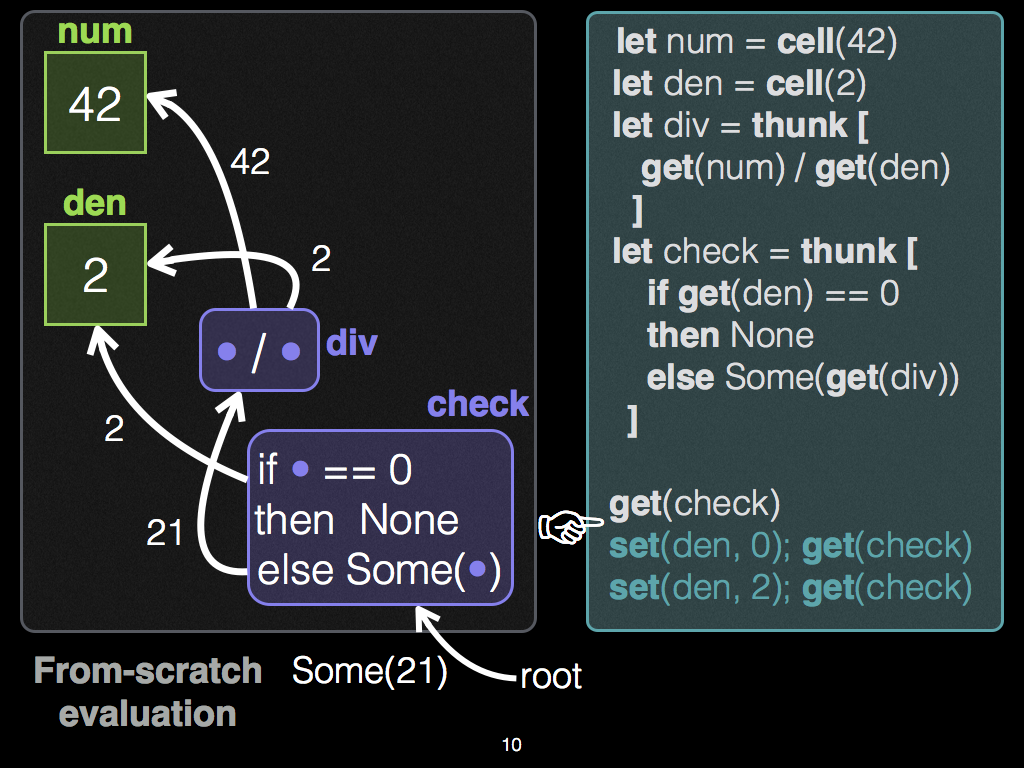 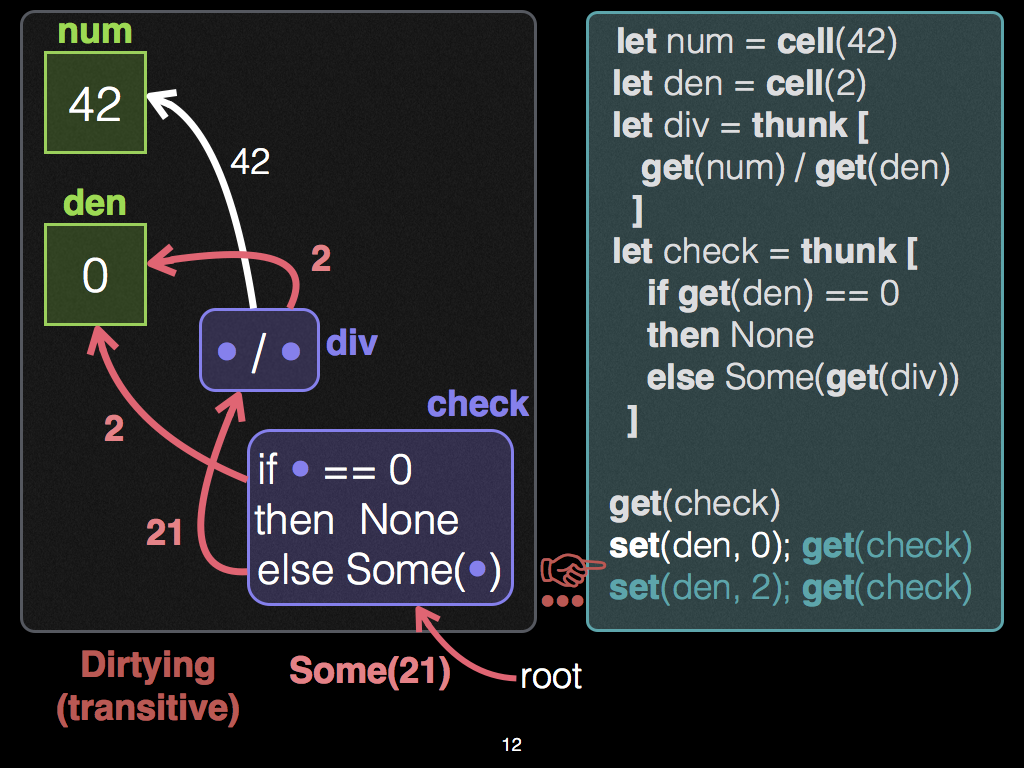 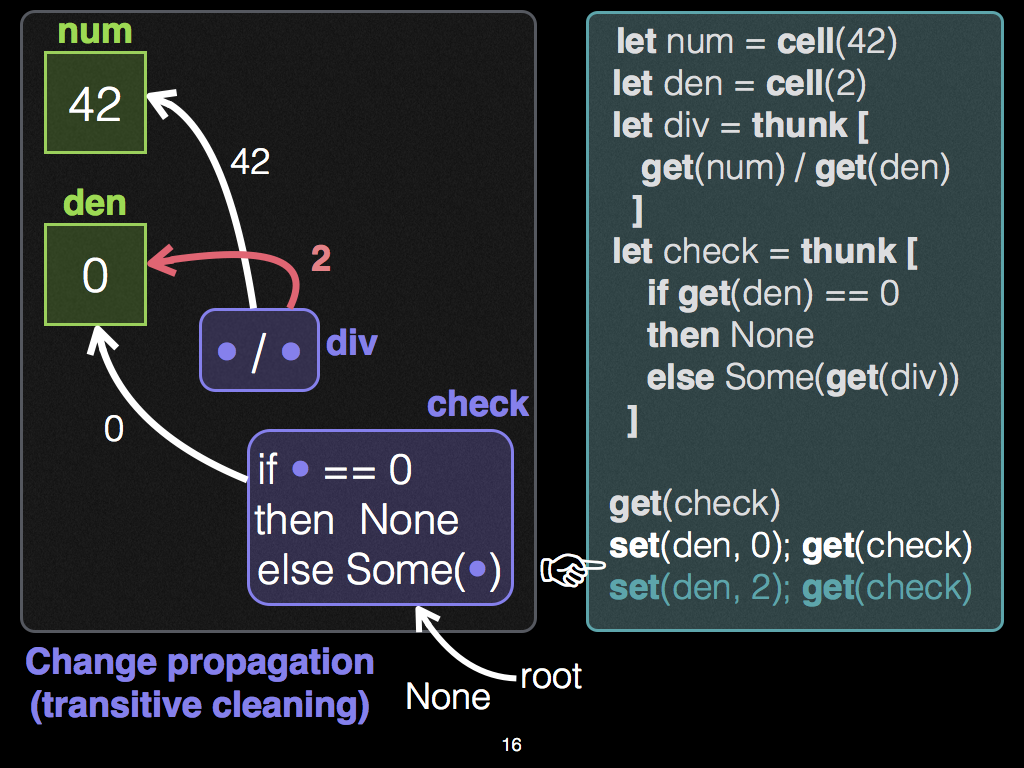 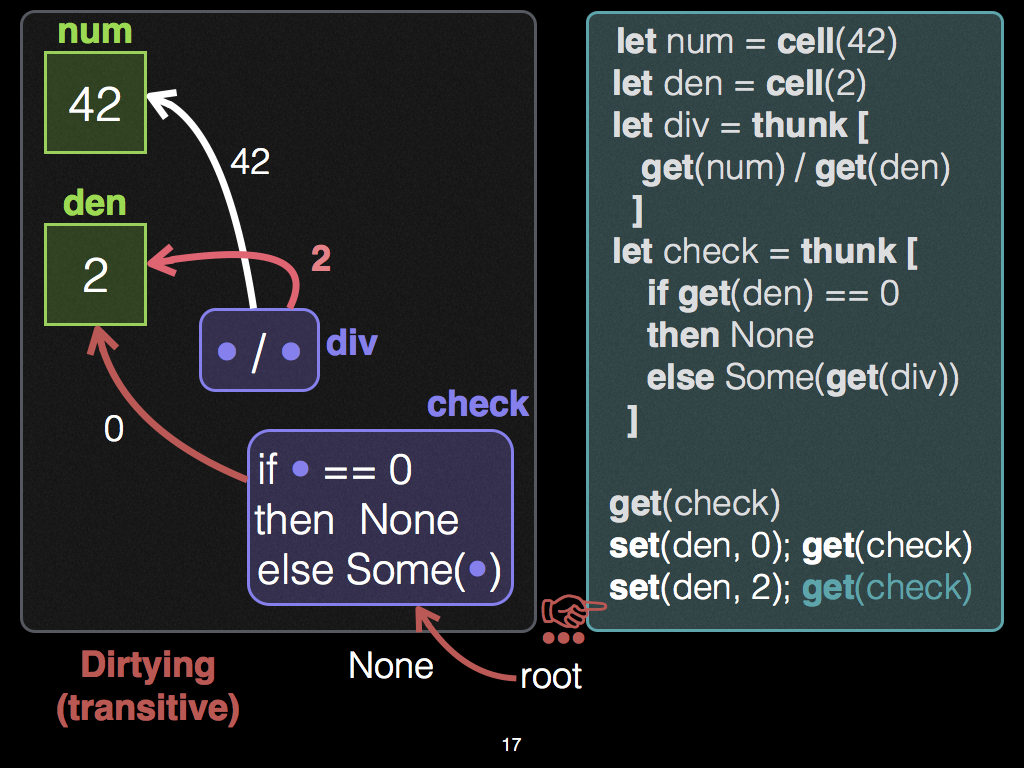 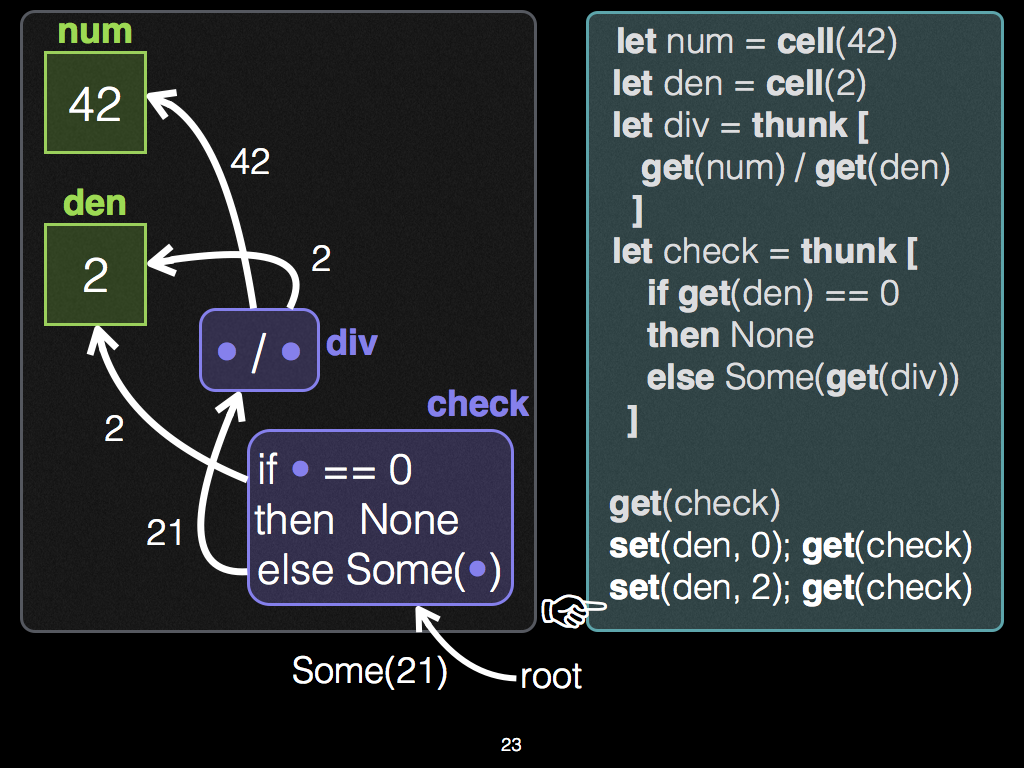 In sum, whether div runs is based on demand from the Editor (of check), and the value of input den. The reuse of div illustrates the switching pattern, which is unique to Adapton's approach to incremental computation.

Past work on self-adjusting computation does not support the switching pattern directly: Because of its change propagation semantics, it would "forget" the division in step 2, and rerun it from-scratch in step 3.

Furthermore, some other change propagation algorithms base their re-execution schedule on "node height" (of the graph's topological ordering). These algorithms may also have undesirable behavior. In particular, they may re-execute the division div in step 2, though it is not presently in demand. For an example, see this gist.

Behind the scenes, the name a controls how and when the Adapton engine overwrites the cached computation of sum. As such, names permit patterns of programmatic cache eviction.

The macro memo! relies on programmer-supplied variable names in its macro expansion of these call sites, shown as x and y in the uses above. These can be chosen arbitrarily: So long as these symbols are distinct from one another, they can be any symbols, and need not actually match the formal argument names.

Below we confirm the following facts:

Nominal firewalls use nominal allocation to dirty the DCG incrementally, while change propagation cleans it.

In some situations (Run 2, below), these firewalls prevent dirtying from cascading, leading to finer-grained dependency tracking, and more incremental reuse. Thanks to @nikomatsakis for suggesting the term "firewall" in this context.

First, consider this graph, as Rust code (graph picture below):

The use of let_memo! is convenient sugar for thunk! and force. This code induces DCGs with the following structure:

Run 1. In the first computation, the input cell a holds 2, and the final result is "4".

Importantly, thunk h is not immediately dirtied when cell a changes. In a sense, cell a is an indirect ("transitive") input to thunk h. This fact may suggest that when cell a is changed from 2 to -2, we should dirty thunk h immediately. However, thunk h is related to this input only by reading ref cell b.

Rather, when the editor re-demands thunk f, Adapton will necessarily perform a cleaning process (aka, "change propagation"), re-executing g, its immediate dependent, which is dirty. Since thunk g merely squares its input, and 2 and -2 both square to 4, the output of thunk g will not change in this case. Consequently, the observers of cell b, which holds this output, will not be dirtied or re-executed. In this case, thunk h is this observer. In situations like these, Adapton's dirtying + cleaning algorithms do not dirty nor clean thunk h.

In sum, under this change, after f is re-demanded, the cleaning process will first re-execute g, the immediate observer of cell a. Thunk g will again allocate cell b to hold 4, the same value as before. It also yields this same cell pointer (to cell b). Consequently, thunk f is not re-executed, and is cleaned. Meanwhile, the outgoing (dependency) edges thunk of h are never dirtied. Effectively, the work of h is reused from cache as well.

The use of let_memo! macro above expands as follows:

A level tree consists of a binary tree with levels that decrease monotonically along each path to its leaves.

Here, we implement incremental level trees by including Names and Arts in the tree structure, with two additional constructors for the recursive type, Rec<X>:

Elimination forms: Folds use memo! to create and force thunks: