Overwrite assert_eq! with a drop-in replacement, adding a colorful diff.

When writing tests in Rust, you'll probably use assert_eq!(a, b) a lot.

If such a test fails, it will present all the details of a and b. But you have to spot the differences yourself, which is not always straightforward, like here:

Wouldn't that task be much easier with a colorful diff? 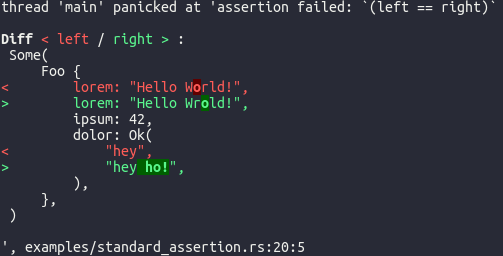 Yep — and you only need one line of code to make it happen:

The exact output of assertions is not guaranteed to be consistent over time, and may change between minor versions. The output of this crate is designed to be read by a human. It is not suitable for exact comparison, for example in snapshot testing.

This crate adheres to semantic versioning for publically exported crate items, except the private module, which may change between any version.

Specify it as [dev-dependencies] and it will only be used for compiling tests, examples, and benchmarks. This way the compile time of cargo build won't be affected!

Also add #[cfg(test)] to your use statements, like this:

For no_std support, disable the std feature and enable the alloc feature: