The Fortanix SGX ABI (compiler target x86_64-fortanix-unknown-sgx) is an interface for Intel SGX enclaves. It is a small yet functional interface suitable for writing larger enclaves. In contrast to other enclave interfaces, this interface is primarly designed for running entire applications in an enclave.

Whereas the calling convention describes how information is passed to and from the enclave, this document ascribes meaning to those values.

The execution environment and usercalls have been designed with the following goals in mind:

Once an enclave TCS is entered, it may performs synchronous usercalls as described in the calling convention. The TCS maintains its execution state between doing a usercall and returning from the usercall. Only when the TCS exits, either through a non-usercall exit or through the exit usercall, is the TCS state destroyed. This is depicted in the following diagram. 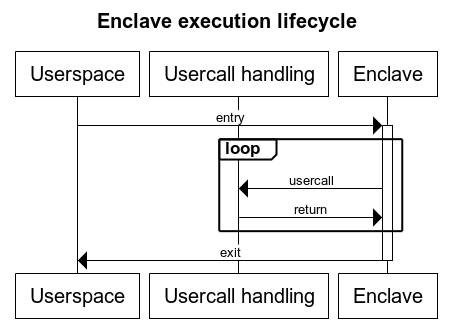