A HashMap variant that spreads resize load across inserts

A HashMap variant that spreads resize load across inserts.

Most hash table implementations (including hashbrown, the one in Rust's standard library) must occasionally "resize" the backing memory for the map as the number of elements grows. This means allocating a new table (usually of twice the size), and moving all the elements from the old table to the new one. As your table gets larger, this process takes longer and longer.

For most applications, this behavior is fine — if some very small number of inserts take longer than others, the application won't even notice. And if the map is relatively small anyway, even those "slow" inserts are quite fast. Similarly, if your map grow for a while, and then stops growing, the "steady state" of your application won't see any resizing pauses at all.

Where resizing becomes a problem is in applications that use maps to keep ever-growing state where tail latency is important. At large scale, it is simply not okay for one map insert to take 30 milliseconds when most take single-digit microseconds. Worse yet, these resize pauses can compound to create significant spikes in tail latency.

This crate implements a technique referred to as "incremental resizing", in contrast to the common "all-at-once" approached outlined above. At its core, the idea is pretty simple: instead of moving all the elements to the resized map immediately, move a couple each time an insert happens. This spreads the cost of moving the elements so that each insert becomes a little slower until the resize has finished, instead of one insert becoming a lot slower.

This approach isn't free, however. While the resize is going on, the old table must be kept around (so memory isn't reclaimed immediately), and all reads must check both the old and new map, which makes them slower. Only once the resize completes is the old table reclaimed and full read performance restored.

There is a silly, but illustrative benchmark in benches/vroom.rs. It just runs lots of inserts back-to-back, and measures how long each one takes. The problem quickly becomes apparent:

You can see that the standard library implementation (through hashbrown) has some pretty severe latency spikes. This is more readily visible through a timeline latency plot (misc/vroom.plt): 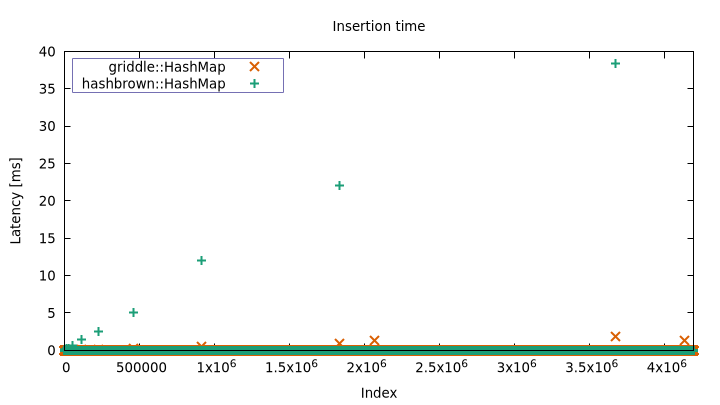 Resizes happen less frequently as the map grows, but they also take longer when they occur. With griddle, those spikes are mostly gone. There is a small linear component left, which I believe comes from the work required to find the buckets that hold elements that must be moved.

Griddle uses the hashbrown::raw API, which allows it to take advantage of all the awesome work that has gone into making hashbrown as fast as it is. The key different parts of griddle live in src/raw/mod.rs.

Griddle aims to stick as closely to hashbrown as it can, both in terms of code and API. src/map.rs and src/set.rs are virtually identical to the equivalent files in hashbrown (I encourage you to diff them!), without only some (currently; #4) unsupported API removed. Like hashbrown, griddle exposes a raw module, which lets you build your own map implementation on top of griddle's table variant.

You can amortize the cost of making hashbrowns by using a griddle..?