It's currently still working in progress and in a very early alpha stage.

API design may changes every day, DO NOT use it in any condition except for test or study!

The goal of this project is try to build a (by importance order):

HTTP framework for myself to write simple web services.

Amiya uses async-h1 to parse and process requests, so only HTTP version 1.1 is supported for now. HTTP 1.0 or 2.0 is not in goal list, at least in the near future.

Performance is NOT in the list too, after all, Amiya is just a experimental for now, it uses many heap alloc (Box) and dynamic dispatch (Trait Object) so there may be some performance loss compare to use async-h1 directly.

To understand how this framework works, there are some concept need to be described first.

Request, Response and the process pipeline

For every HTTP request comes to a Amiya server, the framework will create a Request struct to represent it. It's immutable in the whole request process pipeline.

And a Response is created at the same time. It's a normal 200 OK empty header empty body response at first, but it's mutable and can be edit by middleware.

After all middleware has been executed, the Response maybe edited by many middleware, and as the final result we will send to the client.

For ease of understanding, you can think this word is a abbreviation of "A function read some propety of Request and edit Response" or, a request handler, for now.

But middleware do not works on Request and Response directly. Context wraps the immutable Request and mutable Response with some other information and shortcut methods.

The execution process of middleware uses the onion model: 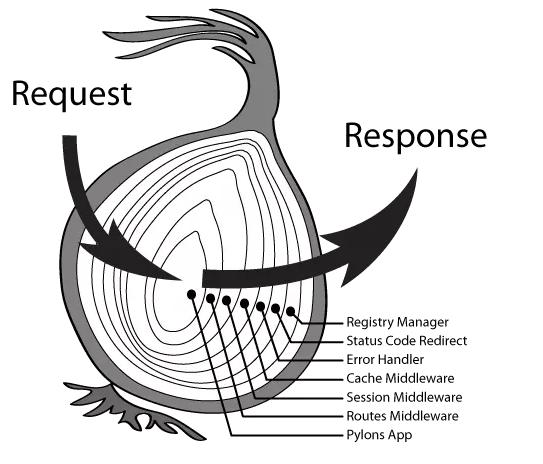 We reuse this famous picture from Nodejs' Koa framework.

That's why next method exists.

The most important method Context gives us is next.

When a middleware calls ctx.next().await, the method will return after all inner middleware finish, or, some of them returns a Error.

there is a simplest example:

When a request in, the output will be:

You can referer to examples/middleware.rs for a more meaningful example.

So with the help of next method, a middleware can not only be a request handler, it can be:

A middleware even does not have to call next, in that statution no inner middlewares will be executed. Middleware like Router or login state checker can use this mechanism to make unprocessable requests responsed early.

You can create you own Middleware by implement the trait for your type, or using the m macro, see their document for detail.

To start a very simple HTTP service that returns Hello World to the client in all paths:

You can await or block on this fut to start the service.